Did you know that over a hundred people have served on the Board of Governors of the Federal Reserve System since its founding? In this month’s edition of Fed Facts, we’ll take you back to the beginning and learn how the Board’s structure has changed over time.

Of the five members appointed by the president, the president designated one as "governor" and one as "vice governor." The governor served as the active executive officer of the Federal Reserve Board. 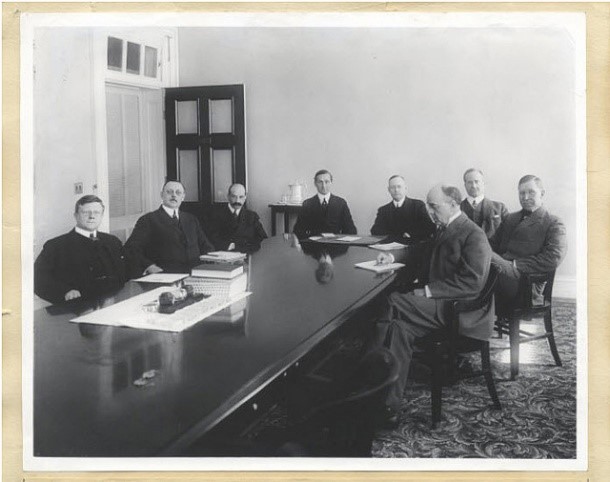 The Banking Act of 1935 renamed the "Federal Reserve Board" as the "Board of Governors of the Federal Reserve System," the "governor" as the "chairman," the "vice governor" as the "vice chairman" and "members" of the Board as "governors." It also increased the number of governors appointed by the president to seven and specified that the Secretary of the Treasury and the Comptroller of the Currency would no longer serve on the Board.

Today, the members of the Board of Governors are still nominated by the president and confirmed by the Senate. Since the Dodd-Frank Wall Street Reform and Consumer Protection Act of 2010, the president also designates, and the Senate confirms, a "vice chair for supervision." This role is responsible for developing policy recommendations regarding supervision and regulation of depository institution holding companies and other financial firms and oversees the supervision and regulation of such firms.

The photo below was taken at a Board meeting on January 30, 2020. It shows the current Board of Governors from left to right: Vice Chair Richard H. Clarida, Chair Jerome H. Powell, Vice Chair for Supervision Randal K. Quarles, Governor Lael Brainard and Governor Michelle W. Bowman. 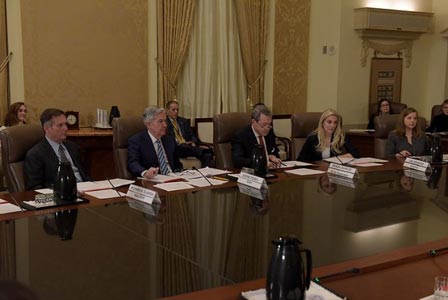 To learn more about Board of Governors members, past and present, visit FederalReserve.org (Off-site).